So, let’s talk about bad karma. Bodhidharma (the founding teacher of Zen in China) taught that

When those who search for the Path encounter adversity, they should think to themselves, “In countless ages gone by, I’ve turned from the essential to the trivial and wandered through all manner of existence, often angry without cause and guilty of numberless transgressions. Now, though I do no wrong, I’m punished by my past. Neither gods nor men can foresee when an evil deed will bear its fruit. I accept it with an open heart and without complaint of injustice. The sutras say “when you meet with adversity don’t be upset because it makes sense.” With such understanding you’re in harmony with reason. And by suffering injustice you enter the Path.
(“Two Entrances and Four Paths”, translation by Red Pine)

To paraphrase the above, whenever bad things happen to me I should not be upset, instead I should look at my own actions (not only in this life, but especially in past lives) as the cause of these bad things. 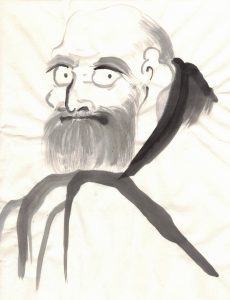 A very simple and direct way to put Bodhidharma’s teaching into action is the practice of Kwan Seum Bosal Chanting, in part because that chant contains a very special mantra that Kwan Seum Bosal has given us to help us with our bad karma. The title of this mantra is “Kwan Seum Bosal’s Mantra for Eliminating All Karmic Obstacles”. It should be obvious that in the very act of calling upon Kwan Seum Bosal to help “eliminate all karmic obstacles” we are acknowledging that we do, indeed, have “karmic obstacles”! Since these “obstacles” are “karmic” they can have no other cause then our own actions in the past. So in a very real sense, when we recite this mantra we are confessing our bad karma, and making repentance.

“Confession” is sometimes called the “third limb” of Buddhist practice (there are seven “limbs” altogether). Here is what I consider to be a very helpful explanation (by Alexander Berzin) of how to view “confession” from a Buddhist perspective:

The third limb of the practice is usually translated as “confession.” But that brings in unnecessary and perhaps misleading associations from non-Buddhist systems of thought. Rather, we are openly admitting that we are not always able to help others; sometimes we are lazy, distracted, selfish, and so on. In the context of karma, we admit that we sometimes act very destructively, but we regret that and really wish that we were not like that. It is not that we have to feel guilty. We really don’t want to be like that. That is quite different from guilt.

Then we say we will try our best not to repeat it. We will try. We cannot promise never to be destructive again. That would be absurd. But we will try. How are we going to overcome this? It is by going in the safe direction of refuge and bodhichitta. We reaffirm that that is what we are going to do. That is our foundation. Then finally we apply opponent forces to counteract our mistakes and shortcomings, which means we will apply whatever we learn here as an opponent. We are going to use it to go in this direction, not just do it for no reason. That is the third limb, openly admitting our mistakes and shortcomings.

To summarize this brief introduction: after the first part of the chant (Homage/Prostrations) and the second part (Offering/Devotion), we come to the part where we recite “Kwan Seum Bosal’s Mantra for Eliminating All Karmic Obstacles”. Reciting this mantra is a practice that both helps us to overcome our karmic obstacles and also (and perhaps more importantly) helps us to understand the origin of those obstacles.

This section of the chant sets the pattern for all the remaining sections (which all involve the recitation of a mantra): first the title of the mantra is spoken once and then the mantra itself is recited (at least) three times. 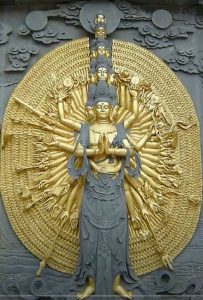 The full title of this mantra is “Kwan Seum Bosal’s Eliminating All Karmic Obstacles Mantra” (觀世音菩薩滅業障眞言). However, in the chant itself this is shortened to just “滅業障眞言”, pronounced “myeor eop jang jinon” (based on the Korean pronunciation, which in Hangul is 멸업장진언). Taken one character at a time, the title literally means “eliminate (滅) karma (業) obstruction (障) true (眞) words (言).”

There are two things about the title of this mantra that can lead to some confusion (or at least they have confused me!). First, there is another, similar mantra with a similar title: 滅定業眞言, which is pronounced “myeor jang eop jinon”. Notice how the second and third syllables are swapped. To make things even more confusing, the syllable that is pronounced “jang” in this other mantra’s title is a different character! The literal meaning of this title taken one character at a time is: “eliminate (滅) fixed (定) karma (業) true (眞) words (言)”. Bonus points are awarded if you recognize 定, which also happens to be the character for “samadhi”. Isn’t it interesting how this “fixed karma” could also, perhaps perversely, be translated as “samadhi karma”? The 滅定業眞言 (myeor jang eop jinon) mantra is associated with Jijang Bosal, instead of Kwan Seum Bosal. This mantra will be discussed further in a future post.

The second potential source of confusion comes from the last two characters: 眞言. This is just the Chinese word for “mantra”, made up of two characters that literally mean “true (眞) words (言)”. The Korean pronunciation of these two character taken together is “jinon” or “jineon” (진언). So far, so good. The confusing part is that there is a different character that is often used instead of 眞, namely 真. Both characters (眞 and 真) mean the same thing (true, genuine, real), and are pronounced the same: jin (진) in Korean, zhēn in Mandarin, and shin (しん) in Japanese. Korean Buddhists favor (pretty much exclusively) using the character 眞, whereas Japanese and Chinese Buddhists will more often use 真. The character 眞 is older and considered more conservative, whereas 真 is more recent and considered simpler (even though they both have same number of strokes: 10).

There is one final thing to mention about the word used for “mantra” in the title. There are other ways of saying “mantra” in Chinese, in addition to the 眞言 (or 真言). One of these is found (repeatedly) in the Heart Sutra. Wherever you see the word “mantra” in the Heart Sutra, there is just a single Chinese character being used: 呪, which is pronounced as “ju” (주) by Koreans, and as “zhòu” in Mandarin, whereas Japanese Buddhists pronounce it “shu” (しゅ). This character has somewhat more explicitly magical/esoteric connotations than 眞言. That being said, the Shingon, 真言, school is the main representative of Esoteric/Tantric Buddhism in Japan, and, more generally, “Vajrayana” and/or “Esoteric Buddhism” are often referred to in Chinese as either “mantra teaching”, 真言教, or “mantra path”, 真言乘. Because of it’s spookier connotations, the character 呪 is often translated into English as “charm” or “magic spell” or even “curse”, although these translations can be very misleading, especially in a Buddhist context. And just to make things really interesting, there is (of course!) an alternative form of the character 呪 that is frequently encountered: 咒 (it has the same meaning and pronunciation as 呪).

But wait, there’s more! There is also at least one other frequently encountered term for “mantra” in Chinese: 陀罗尼, which is actually how Chinese Buddhists decided to translate the Sanskrit word dhāraṇī (or, without funny characters: dharani). Although “mantra” (मन्त्र) and “dharani” (धारणी) are two clearly different terms in Sanskrit, there is really no hard and fast rule for what makes them different, other than the fact that a “dharani” is usually longer than a “mantra” (so that one quick and dirty definition of “dharani” is just “long mantra”).

The mantra itself is actually less confusing. It is always “spelled” the same way with the same 8 Chinese characters, as shown above. Naturally the way these characters are pronounced differs among Buddhists in Asia (and even more so outside of Asia) depending on one’s native language. The pronunciation given above is the phonetic representation in Latin/Roman characters based on the Korean pronunciation.

But what does it mean?

Now let’s jump to the end of the mantra: “sabaha” which is the Koreanized way of pronouncing the Sanskrit svaha (svāhā, स्वाहा). People give all kinds of very loose, impressionistic, subjective “translations” of svaha, ranging from “Amen” to “Halleluja” to “Hail” to “Oh wow!”, etc. The literal meaning is more or less something like “well said”, and in practice the functional meaning is, essentially, “so be it”. See the “Sources and Resources” section below for more on “sabaha/svaha”. As a general rule, it’s best to just leave sabaha/svaha untranslated.

The ” Vairocanabhisambodhi Sutra” states “Mantras that have the word oṃ at the beginning and have svāhā added at the end are for use in pacifying calamities.” (Chapter 6: “The Rules for Recitation”).

So this mantra is really a “mantra sandwich” – with the two pieces of bread being “om” and “sabaha”. The meat of the sandwich is a-ro-reuk-gye. And in Sanskrit this turns out be a real word (ālolik, आरोलिक्), meaning “the unstained one”. If we accept that 阿嚕勒繼 is here used as a Chinese transliteration of आरोलिक्, then the literal meaning of the mantra is “om the unstained one sabaha”.

•  Finally, did I mention that the character 咒 has some spooky connotations??
Well here is a trailer for a movie, whose title is simply “咒” (translated into Engish as “Incantation”):