If you are interested in any of the classes advertised in the Spring, 2023 issue of Tricycle, please feel free to email me with any questions you might have: steinmetz.curt@gmail.com. 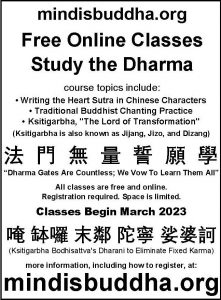 All of my classes are recorded and posted for (free) public viewing on youtube. But if you want to participate in a live class (via zoom) you need to register through my Patreon page: https://www.patreon.com/mindisbuddha.

IMPORTANT: You must complete your registration at least 24 hours prior to the time a class starts in order to receive the zoom link!

As stated above, all of these classes will be recorded and made freely available on youtube. But you can also participate in the live classes (via zoom) if you register through my Patreon page (linked to above).

For each class there might be many different posts scattered about in this blog. But each class will have it’s own Main Page, and each of those will always be listed on this page.

Here is a brief description of each class:

1. The Heart Sutra in Traditional Chinese Characters. “Sutra Writing” is the ancient Buddhist practice of writing out Buddhist texts (including relatively short ones such as the Four Great Vows, the Ten Line Kannon Sutra, and the Heart Sutra) using Traditional Chinese Characters (aka Hanzi, Kanji, and Hanja). This can be done simply as a (very powerful) meditation practice in its own right, but it is also a traditional way of generating stores of merit (to be shared with all beings). For those who practice in Buddhist traditions that come from East Asia (such as Zen), learning Traditional Chinese Characters also helps us to strengthen and deepen our connection to these ancient traditions, while learning more about our spiritual roots. This class will meet on the first Saturday of each month, starting on Saturday, March 4, 2023. Each class will be two hours long, starting at 3pm Eastern Time.

2. Buddhist Chanting. Chanting was one of the practices taught by the Buddha himself 2500 years ago. This traditional practice was strongly emphasized as one of the “Three Gates” taught by the great Zen Master Sosan Taesa (西山大師) who lived in Korea four centuries ago. This tradition was passed down to my grand-teacher, Zen Master Seung Sahn, who made a point of teaching his (often quite reluctant) Western students to do traditional Buddhist chanting in the Korean style. These chants are actually in Chinese, but with the Korean pronunciation given to the Chinese characters. In these classes we will learn how enter this gate of practice. We will learn (and do!) the chants together. The chants covered include: Homage to the Three Jewels, The Heart Sutra, The Great Dharani, and more. This class will meet on the 1st and 3rd Tuesday night of each month, starting on Tuesday, March 7, 2023. Each class will be 75 minutes long, starting at 7pm Eastern Time.

3. Jijang Bosal. This Bodhisattva is also known as Ksitigarbha in Sanskrit, Jizo in Japanese, and Dizang in Chinese. He is the Bodhisattva who accompanies and assists sentient beings during the journey after death from one lifetime to the next. As interesting as that is, there is actually a lot more to this Bodhisattva. In the “Jijang Bosal Book Club” we will read two Sutras concerning Jijang Bosal, and three different modern scholarly books focused on him. The three books are: (1) “The Making of a Savior Bodhisattva: Dizang in Medieval China” by Zhiru Ng, Chair of Religious Studies, Pomona College; (2) “Living Karma: The Religious Practices of Ouyi Zhixu” by Beverley Foulks McGuire, Professor of Philosophy and Religion, University of North Carolina Wilmington; and (3) “The Scripture on the Ten Kings and the Making Purgatory in Medieval China” by Stephen F. Teiser, D.T. Suzuki Professor in Buddhist Studies, Princeton University. This class will meet on the 2nd and 4th Tuesday night of each month starting Tuesday, March 14th. The class will meet for 75 minutes starting at 7pm Eastern Time.